Sounds from the Cockpit

Cassette players first came out in the late 1960s. In April 1968 on an R&R in Hong Kong I bought a portable cassette player/recorder. I eventually took it up with me on some missions. All I did was take the microphone and jam it up under my flight helmet next to my ear. The sound quality isn't great but most of the communication is listenable. What you hear are the external sounds and radio chatter as they arrived at my ear over forty years ago. The only editing was to drop long sections of nothing happening but engine noise. Most of these recordings were done in the fall of 1968 after I had been transferred from the first to the third platoon and my call sign had changed from Catkiller One-Five to Catkiller Three-Nine. So you may hear me using either call sign depending on the clip. The casettes were I believe 30 minutes long and the missions were 2-3 hours long so there are gaps when the tape ran out at a time when I was too busy to think about changing cassettes. Again free to listen, not free for commercial use without permission. 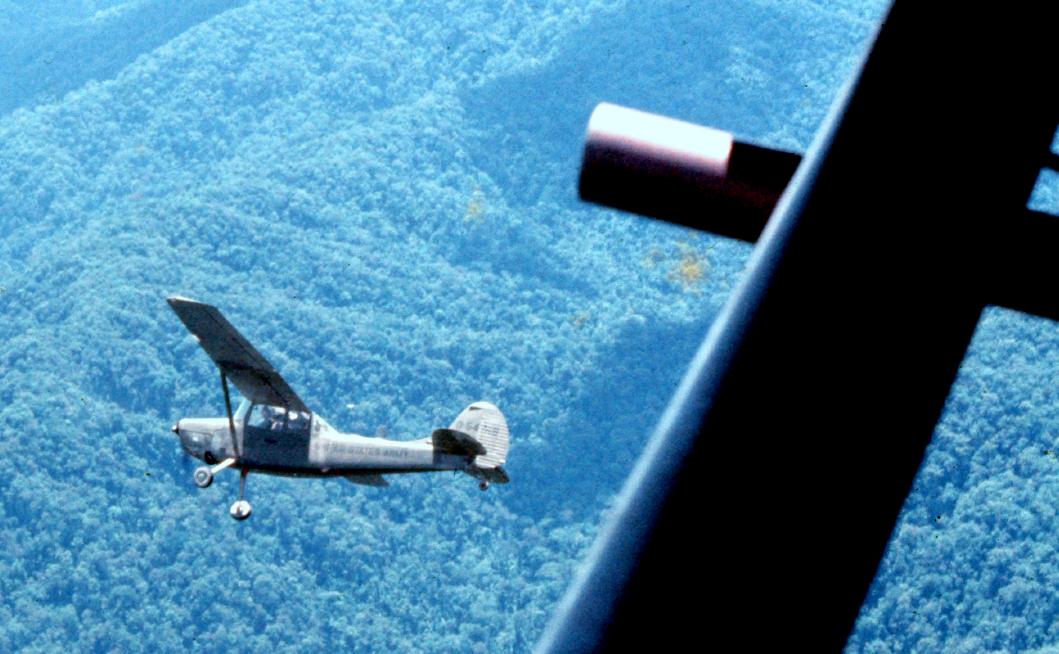 The first four clips were all made on one mission flown sometime in the fall of 1968 over Leatherneck Square between Dong Ha and the DMZ. It involved troops in contact against an NVA (North Vietnamese Army) force of at least company size. I relieved Catkiller One-Eight on station at the beginning and Catkiller Four-Five takes over from me at the end. In these clips you will frequently hear the NVA adversaries referred to by the politcally incorrect term of "gooks." Yes it is offensive but compared to what what we were attempting to do which was to kill these people, calling them derogatory names was almost benign. Dehumanizing the enemy to make it more conscionable to kill him is an essential part of warfare. If you have a problem with that you will need to take it up with a higher pay grade than anyone mentioned on this site. Hold fewer wars and you will have fewer terms of endearment.

These clips will include the following voices in addition to mine: Smitty India (Ken Antel, Marine aerial observer, back seat of my plane), Catkiller One-Eight (Doc Clement), and Catkiller Four-Five (Grayson Davis).

Take off from Dong Ha; communicate with Dong Ha DASC; link up with Catkiller One-Eight as he runs an airstrike; confusing situation initially--multiple players; get brief from One-Eight and assume mission. Target is NVA troops in the open and under light cover.

Later in the same mission after replacing tape; someone with bad radio squawking occasionally in first couple of minutes; Smitty India is running an artillery mission from the back seat; attempt to get snake and nape from DASC but only high dive ordnance available; run a high dive airsrike in close support with difficulty--illustrates why they aren't intended for that mission; tape runs out during BDA.

Later in the mission with a new tape; some communication with Seaworthy (Marine helicopter gunships); I then control another high dive flight with even steeper dive angle and more difficulty; I finally get a flight of Helborne snake and nape (preferred ordnance for close air support) but the tape runs out in the middle of that strike.

Me briefing Catkiller Four-Five and handing off mission; my comminication with Dong Ha Dasc and Dong Ha tower returning to base.

A few minutes at the end of a different mission; initial chatter with Dong Ha DASC; then chatting with Catkiller Four-Nine (Lee Harrison) about flashes from artillery or anti-aircraft fire north of the river; decide it is too late to start a mission and return to base.

Mission to prep an area for a sweep next to Hai Van pass just north of Danang; two very clear airstrikes but on a boring target; no troops in contact no ground fire; some small secondaries; I was originally advised that there were to be 4 flights of all napalm fragged for 0800 but no such thing (I never encountered an all napalm flight ever); back seat was Senator Two-Two, an Army observer, good guy, but I don't recall his name.

this was my last flight with the call sign one-five; Smitty Tango (Marine Captain Tom Bailey is AO); no real action; we observe recent trail activity; I talk about it being my last flight as one-five; a couple of minutes of AFVN music; a lot of bandit reports on guard; I make my low pass streaming smoke.

Back to Front Page